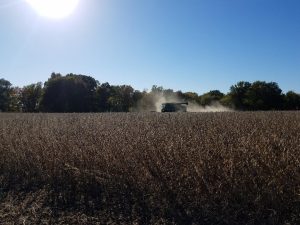 After a very dry summer, we have been getting some moisture in the form of rain for the last 2-3 weeks. Very welcome, even if it did slow harvest a little.

On October 23, we finally harvested the Soil Health Study Field. We were pleasantly surprised with the results. First, the whole 30-acre field missed averaging 60 bpa by just a few pounds across the scale at the elevator. The other fields of soybeans that we have been combining were only averaging 40-45 bpa.

As I have talked about in previous blogs, this field has been managed, since 2012, to improve soil health. We have been using the SOIL Service Nutrient Recycling Program, cover crops, and either no-till or the Aerway each year. The NRP was applied the previous three years before this year. Last year we had a very good corn crop on this field, under good growing conditions. This year, because of the improved soil health, we had a very good bean yield despite of the extremely dry conditions.

One of things that I did test in t

his field this year was the use of 3-18-18-1, including 1 pint per acre of Sugar E-Boost as a starter for the beans. I compared it to using only 3-18-18-1. Once again, just like on the corn, there was a 3 bushel per acre yield increase. If you are wondering, at the current local cash price ($7.55) and using the 2×2.5-gallon jug price of 95 cents per acre, that is a $22.70 ROI, just by adding 1 pint per acre of Sugar E-Boost to the starter. Using Sugar E-Boost with any starter program, and or foliar program, is going to be standard for us from now on.

Harvest started out great this year. Around here we started the second week of September (which seems like an eternity ago) then the cold and rains hit. Since the rain, it has been a struggle to get the crops out, but from meeting and talking to several farmers, it seems they are happy with the corn and bean yields, just wish price was better.

We combined our corn plots last Friday, October 19, and yields were good. We do not have all our information put together yet, but the plots seemed to do very well.

SOIL Service Inc. is going to hold a tillage/agronomy day November 13 starting at 9:30 a.m. At this event we are going to demonstrate our NEW Rogue VT® tillage tool along with some other tillage methods, then we will have a lunch and go over our plot results.

Hope to see you there. Yesterday, we harvested the Missouri Corn Plot, and boy were we surprised! Corn was a lot better than ever could be expected, after the extremely dry summer we just experienced. The yields in this year’s plot, ranged from 194 to 220 bushels per acre.

What I was looking at in this plot, were the differences in using a complete starter program (5 gallon 3-18-18-1 + 1 pint each of 9% Zinc, 3% Calcium, and 6% Manganese per acre). Then adding 1 pint per acre of Sugar E-Boost, then 2 ounces per acre of Liquid Bacteria Concentrate & Soil Restorer.

Here are the results:

The starter program added 10.9 bushels vs. no starter.

The pint of Sugar E-Boost gained 3.1 more bushels when added to the starter program.

Adding the LBC & SR gained 8.7 more bushels when combined with the starter and the SEB.

The take away: Using a complete Crop Choice Starter Program and include Sugar E-Boost, along with our Nutripathic Products, can insure that your corn crop can hold up to extreme stress and increase your bottom line.

Watch for the complete plot results on our web site: soilserviceinc.com later this fall. Harvest is underway in Missouri, and early results are coming in (as seen in the above screen shot). Even though we have been under extreme drought conditions here, it looks like the corn yields are going to be pretty good.

This early report came from John Hansman in Central Missouri. You might remember that name from last year. I followed John’s soybeans from planting through harvest. This year he used the entire Soil Service Program, from starter at planting and foliar feeding with Foliar Opp.

Even with the extreme stress that we have experienced in this part of the country, this shows that using a “balanced” fertility program from start to finish in a crop helps the plants deal with extreme stress and be able to finish strong. By the way, John reported that it looked like he was averaging about 162 bushels per acre in this field. Thanks for the report, John!

Next week, September 11 thro 13, we will be at Husker Harvest Days in Nebraska. This will be my very first HHD, and I am looking forward to seeing this farm show. If you are planning to attend, please stop by the Soil Service, Inc. booth (#761) and visit with us about our Crop Choice fertility program to help you get the most out of your crop in 2019.